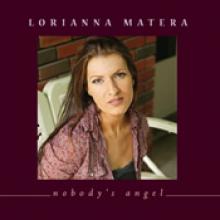 The release of Lorianna Matera’s debut CD, “Nobody’s Angel”, signals the arrival of a unique new talent on the acoustic music scene. Lorianna’s angelic voice defies description, and her music is a pure and honest blend of bluegrass and traditional country. Produced by bassist Dave Pomeroy, "Nobody's Angel" features a stellar supporting cast of players and singers, including Sam Bush, Tim O’Brien, Larry Cordle, Ronnie and Rob McCoury, Jon Randall, Terry Eldredge, and The Whites. Lorianna puts her distinctive"acoustic country" stamp on a sweet set of top shelf songs by writers such as Loretta Lynn, Bruce Springsteen, Peter Rowan, Carl Jackson, and Gretchen Peters. Lorianna is an artist with something to say - we hope you will listen.

Lorianna grew up in a family with six children on a farm in rural New Jersey, in a home filled with traditional country music. One of her earliest memories is of hearing Merle Haggard on the radio and singing along. She was also deeply influenced by the music of Kitty Wells and Loretta Lynn. At age 13 her older brother gave her a guitar and a chord book, and she began pursuing her dream of a singing career. A few years later, she began performing live with various country bands in the Northeast before moving to Nashville in 1990. Not long after her arrival, she was befriended by Dottie West, who took the young singer/songwriter under her wing. Throughout the 90’s, Lorianna continued to hone her craft, singing demos and playing writer’s nights around Nashville. She was a featured performer at the Roy Huskey Memorial Scholarship concert at the Ryman Auditorium in 1999 and 2000, and also sang at Carnegie Hall in May 2002 as part of an all star acoustic band for CBS Television’s annual convention. Curb Records artist Keith Perry was so impressed with her voice that he asked her to record a duet of “Angel Band” with him on his latest CD.

Recently she has been staying busy performing live, writing songs, and has just released her debut CD on Earwave Records, produced by noted Nashville bassist Dave Pomeroy. She has earned the respect of her musical peers, and acclaimed artists such as Tim O’Brien, Sam Bush, Jon Randall, Ronnie McCoury and Larry Cordle have already contributed their talents to her album. Combining country and bluegrass influences with great songs and passionate performances, Lorianna’s timeless music is the traditional sound of the future.